The sales launch of the first version started in 2002. That’s not a typo. It was really 2002. The development took place before that, of course. The first version did not yet have a WYSIWYG editor, but only offered an HTML text editor with syntax coloring. However, external editors were already very well supported. I can remember a customer who said that the HTML engine of JavaHelp offers so few possibilities anyway, that a text based HTML editing is the best :-)

JavaHelp was treated stepmotherly by the major help authoring tools at the time. Many users therefore used text editors to maintain the necessary XML files for the project, table of contents and index files. Just adding a single page, linking it, with all the keyword and content information therefore took quite some manual effort.

Helen was able to import existing JavaHep projects. And from that users could start immediately.

For those users who already had HTML data and would need to support the JavaHelp help systems, a wizard was provided that could quickly create a project from it.

At that time, it was not a matter of course that software could be purchased exclusively via the Internet and that delivery was exclusively electronic.

To make this possible, we had a self-operated web store based on PHP at the beginning. Through a direct contract with a credit card processor, fully electronic sales were made possible. This worked quite well for customers from America, but German customers at that time preferred to buy only on account. An exclusively electronic delivery was still very rare in Germany at that time.

Nevertheless, sales got off to a very slow start. That was a bit depressing. It’s not enough to just develop a product. Like many people who come from the technical side, it was not easy. You have to market something as well, if no one knows that such a tool exists, then no one will buy it. The later versions with WYSIWG Editor also suffered from this shortcoming.

Then sometime after the first few weeks after sales started, I thought I might sell a few dozen copies at most. I then had to switch back to project work. Somehow food has to be put on the table and bills paid.

Then in September, I introduced Helen at a meeting of the France Chapter of the Society for Technical Communication (STC). There and at similar events later, I learned a lot in conversations with real help authors.

From the point of view of creating your own product with which you can earn a living, it was clearly a failure. JavaHelp was certainly a niche, especially since Java was hardly used on the desktop. Although sales were significantly below expectation, the life of the product was much longer than expected. The longer sales period eventually ended up generating some revenue over all these years. So it would have been entirely possible to gain a foothold if more funding had been available to develop other documentation areas product wise (especially the emerging web-based help systems). Still, that would have required proper marketing as well.

Before the end of this posting, here is a screenshot of the webpage from 2002 :-) 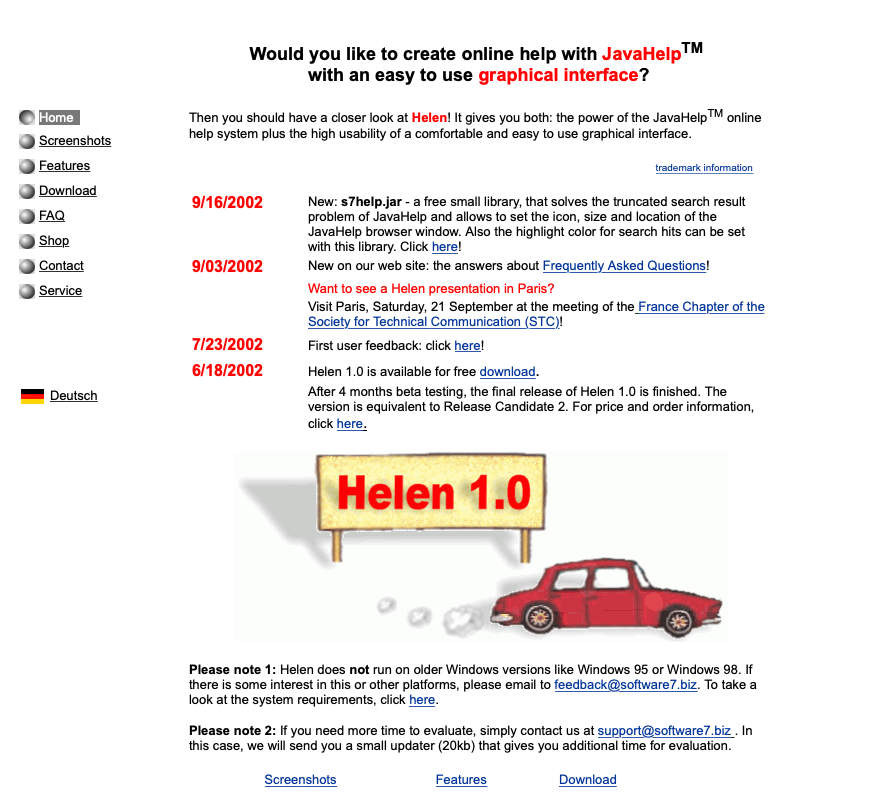